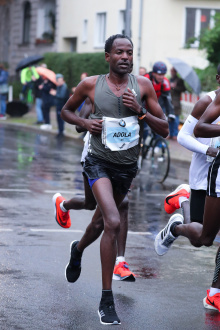 Following Kenenisa Bekele’s commitment to start at the BMW BERLIN-MARATHON & Inline Skating from September 25 to 26, 2021, other top stars from the running and inline skating scenes have now confirmed their participation. Thus, an impressive field of runners and skaters will use the last weekend in September to celebrate the #restartrunning of the marathon community in the German capital. Due to the current pandemic situation, this year there are reduced numbers participating and a detailed hygiene and safety concept, which makes an event of this magnitude possible at all.

Men’s field:
A look at the starting list makes clear how much the elite has also been longing for this day. Kenensia Bekele, who missed the world record by just two seconds with his top time of 2:01:41 hours at the BMW BERLIN-MARATHON 2019, is not the only Ethiopian with ambitions of winning. In 2017, his compatriot Guye Adola finished second at the race on the Spree River with an excellent time of 2:03:46 hours for his debut marathon, posing a real challenge for the winner, Eliud Kipchoge. In 2019, the 31-year-old provided an impressive performance in a hard-fought marathon in Valencia, finishing third. Completing the Ethiopian triumvirate is Olika Adugna, who is only 22. He surprised everyone in his first 42.195 km competition on the streets of Dubai with a victory in 2:06:15 hours, signalling to the established long-distance running world that there is promise of more to come. Like the Ethiopians, the Japanese are showing up with a squad of strong athletes, led by 2021 Lake Biwa Marathon winner Hidekazu Hijikata. If the Japanese athlete can repeat his performance from the spring, he also has a chance at a podium spot. From a national perspective, a well-known Berlin frequent starter is worth a look. In recent weeks, Philipp Pflieger has repeatedly spoken about his hard-work collaborating with coach Renato Canova. Now Pflieger wants to put his words into action.

Women’s field:
In the women’s field, Ethiopian Hiwot Gebrekidan presents herself as the clear favourite with her best time under 2:20 hours achieved at this year’s Milan Marathon (2:19:35). Purity Rionoripo (KEN) with a best time of 2:20:39, Amane Beriso (ETH) with 2:20:48 as well as Shure Demise (ETH) with 2:20:59 all have the potential to approach or even beat the magic threshold of 2:20 hours. The distribution of the top spots in the women’s event remains highly exciting. Rabea Schöneborn of LG Nord Berlin was scheduled as a substitute runner for the German marathon team at the Olympic Games. She did not get to compete in Japan. Now she wants to perform in her hometown. Just how serious she is about it is signalled by her new best time of 1:10:35 recently achieved at the GENERALI BERLIN HALF MARATHON. In April 2021, Schöneborn pushed her personal record for the 42.195 kilometres to 2:27:03 at the elite marathon in Enschede. At the same venue, Laura Hottenrott, who competes for PSV Grün Weiss Kassel, also delivered a strong performance including a best time of 2:28:02. The Hessian will also be on the starting line at the BMW BERLIN- MARATHON.

Inline skaters
In July, Frenchmen Nolan Beddiaf and Marine Lefeuvre, both of EOSKATES WORLD TEAM, took the marathon titles at this year’s European Championships. Now they want to repeat their victories in Berlin. However, in the men’s race, Belgian Bart Swings (POWERSLIDE MATTER INTERNATIONAL), six-time winner of the race, will also be at the start, as well as his teammate Felix Rijhnen from Darmstadt, who won in 2019. The ROLLERBLADE SPEED TEAM will be represented by Ewen Fernandez (FRA), winner in 2011 and 2012, among others. In the women’s race, the biggest competition for Lefeuvre also comes from POWERSLIDE MATTER INTERNATIONAL: two-time winner Sandrine Tas from Belgium and Katharina Rumpus from Darmstadt, who won in 2018. Manon Hekman-Kamminga (NLD), the winner in 2013, 2014 and 2016, will compete in her first race after a baby break.